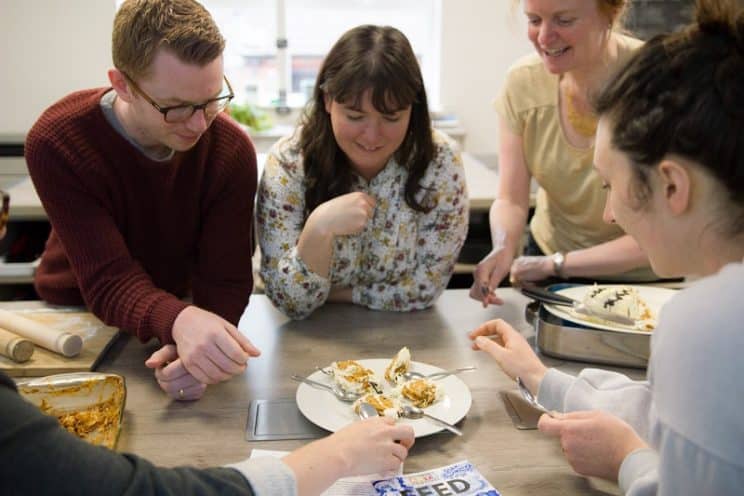 There are 100 events over 9 days going on at this year’s Didsbury Arts Festival and Food Sorcery is proud to be hosting one of them. The Festival is a celebration of creative skills including film, music, theatre, dance, comedy and literature, and now cooking has been added to that list.

‘Feed’ is about bringing recipes to life by encouraging Didsbury people to share the stories behind their favourite recipes and hosting a wonderfully named ‘Pot Luck Supper,’  so called, because the menu on the day will be a glorious surprise! Participants don’t have to be from Didsbury, in fact some of the people who have come forward so far were born as far away as Italy and Japan, but now call Didsbury home.

On Thursday, there was an informal gathering to plan the future event, which turned into a lovely evening of great food and fun conversation as people shared their food and stories sitting around a communal table. We were introduced to ‘Parmo,’ an irresistible combination of bread crumbed chicken, creamy sauce and melted cheese that is the perfect end to a great night out in Middlesbrough! The story behind it was told with such pride, and the dish itself was a delicious comfort food that would satisfy the most ardent party animal.

Then we tried a dessert that was straight out of the seventies! A decadent combination of cream, sherry and ginger biscuits. Wait a minute. Sherry? Does anyone even drink that now? Possibly not, but that was part of the trip down memory lane, an evocation of 70’s dinner parties, seeing Mum get dressed up and glam with trendy blue eyeshadow, and then sneaking into the kitchen the next morning to pinch a cheeky mouthful of the dessert from the fridge!

What was really clear from the evening, is how food brings people together. Our small group were born in different continents and from different generations, but our joint love of food meant that each of us had a great evening. That is the essence of the FEED event and after the evening has been enjoyed, the plan is to create a cookery book to capture the recipes and the stories.

There are two ways to get involved. If you think you could prepare a dish to share at the event on Sunday 25th June then email – [email protected]. Alternatively, you can attend the ‘Pot Luck Supper’ as a guest, for the magnificent price of only £6 per person www.eventbrite.co.uk/e/feed-a-didsbury-cookbook-tickets-33937557147

Cooking Up a Life Change