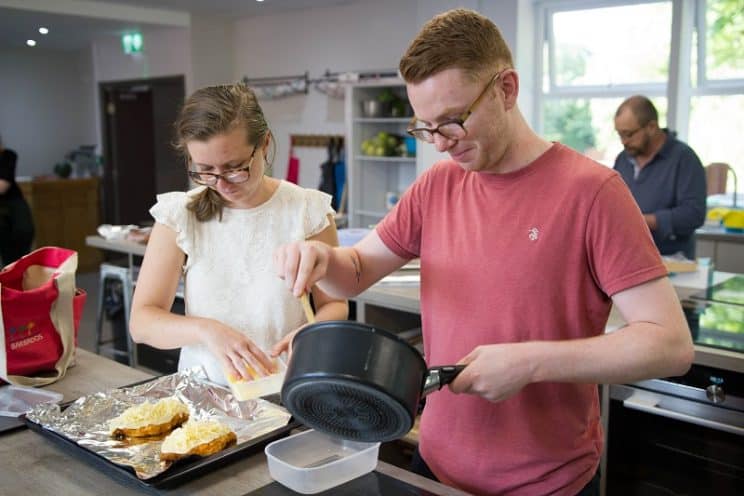 FEED was a magical event that took place at Food Sorcery Cookery School as part of the recent Didsbury Arts Festival.

The brainchild of two artists, Rebecca Legg and Ruth Dyer it was a celebration of how food and memories are intertwined. Local people were asked to come forward to share their recipes and ‘Food Stories’ at three pop up supper clubs which they did with warmth, passion, and humour.

This is the first Food Story from John Hudson, in his own words.

This dish is about me being proud of where I’m from.

Middlesbrough gets a bad rap. A few years back it was voted the worst place to live in the country and it’s always looked upon as industrial and cold. But for me, it’s always been a warm place to grow up, there’s a real community spirit. You know most of the people in the town. When I moved away, after university, I went to London for work. I actually found London really cold and faceless. I didn’t really know anyone. I joined up with a group of Middlesbrough Supporters South, supporters of the football team. It was a nice way to get together with people who were similar to me. Wherever we booked for a social night, we had to make sure the chef would make Parmos for us. It was really nice to get together with these people who shared the same feelings as I did about being so far from home and feeling a little bit…….like something was missing. It was nice to eat something that made you remember…..made you feel like you were at home.

The story that I’ve heard is that an Italian Chef who signed up with the British Army in WW2 got injured and was sent to a hospital in the North East somewhere and ended up in Middlesbrough. He couldn’t get the freshest tomatoes to make parmigiana, so he made this instead. I don’t know how true that is!

Place the chicken between two pieces of parchment paper. Hammer with a rolling pin until as thin as possible. Marinate in some buttermilk for a few hours or overnight if you can. To cook, heat some oil in a frying pan. Use three shallow bowls and fill one each with flour, eggs and breadcrumbs. Remove the chicken breast from the buttermilk, shaking off any excess. Place into the flour and turn over to get fully coated. Remove from the flour and place into the bowl of eggs, again fully coating. Finally, place the chicken into the bowl of breadcrumbs and ensure that it is completely covered.

Now carefully place into the hot oil. Cook for about two or three minutes on either side, remove and allow to rest on kitchen roll. Repeat for the remaining chicken breasts.

2.    To prepare the Béchamel Sauce

Melt the butter gently – don’t over-heat it or let it brown, as this will affect the colour and flavour of the sauce. As soon as the butter melts, add the flour and, over a medium heat, stir quite vigorously with a wooden spoon to make a smooth, glossy paste. Now begin adding the milk a little at a time – about 1fl oz/25ml first of all and stir again vigorously. Then, when this milk is incorporated, add the next amount and continue incorporating each bit of liquid before you add the next. Keep stirring over the heat until the sauce becomes thicker. This can take ten or so minutes. Be patient!

Once you’ve achieved a smooth, thick sauce, put about four or five tablespoons over each chicken breast. Generously top with lots of grated cheese. Put under the grill for five minutes or until the cheese is melted and starting to brown.