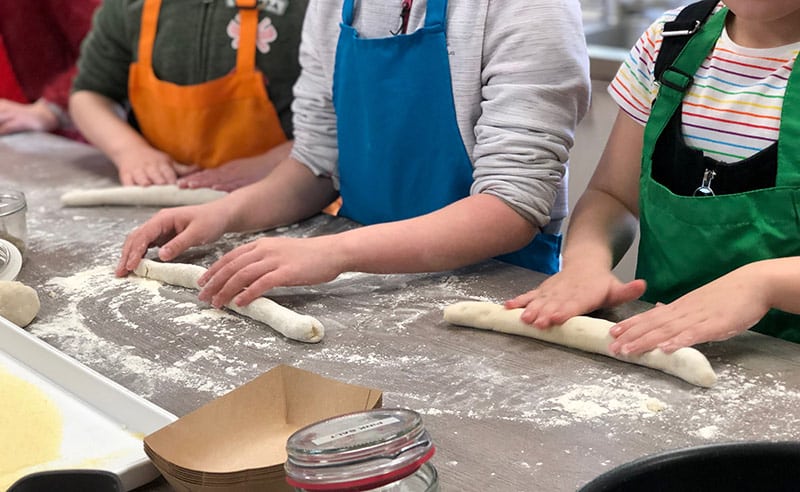 Kids’ Cookery Camps – Everyone Can Cook!

One of the many pleasures of assisting the Chef on the Kids’ Cookery Camps is watching the children create exciting and inspirational food. Depending on the theme of the day, they will make curries, Chinese sweet and sour dishes with egg fried rice or Mexican fajitas with spicy beef filling, topped with sour cream. They will also take plenty home with them and parents are amazed to be greeted with plaited breads, pasta, baklava and fortune cookies! Many of the kids haven’t cooked a lot before, but by the end of the day they will all be mini MasterChef’s!

Chef also encourages them to use ingredients that may not be immediately familiar and on Mexican Day, he introduced goats milk.

On a worldwide basis, more people drink the milk of goats than any other single animal, so it was a great idea to introduce it to the children. Their initial reaction was priceless as it involved a discussion on whether it was possible to get milk from a goat! It was clear that not everyone was convinced, but then opinion was divided on whether they were going to try any. I’m pleased to report that once it was made, all the children tried some and the sauce was declared to be delicious.

The goats milk was easy to get hold of in larger supermarkets.

The recipe was Cajeta Casera which is a sweet, Mexican caramel sauce.

1.    Simply put all the ingredients into a large saucepan.

2.    Warm over a low heat, stirring occasionally until the sugar dissolves. You will know when this has happened because it will start off feeling ‘gritty’ when you stir it, and it will feel smooth when all the sugar has dissolved.

3.    Continue to cook at a gentle simmer, stirring it and scraping the sides of the pot frequently until the milk is thick and golden and has boiled down to a thick toffee layer. This will take about 45 minutes.

4.    Remove from the heat and carefully remove the cinnamon stick.

5.    Once cooled, this delicious sauce can be used on ice-cream or as a topping on cupcakes which is what we did.

6.    It can be stored in a sterilised jar and kept in the fridge for up to three months.