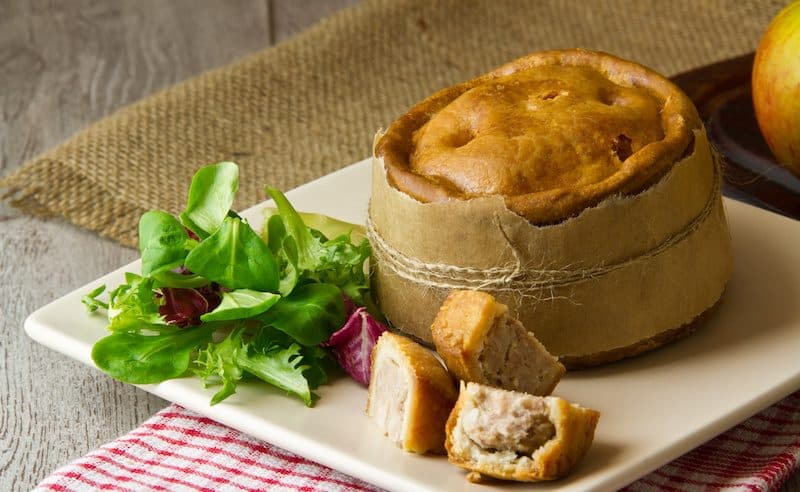 A large artisan Melton Mowbray pork pie wrapped in brown paper and twine, with small pork pies cut and bitten in front. Salad and an apple are close, on burlap, red gingham and distressed boards.

The Man. The Legend.

According to legend, St. George slayed a dragon and saved a princess!

It’s a story that has captured the imagination of artists, poets, playwrights and children for centuries. What a crying shame that it’s not true.

A slightly less romantic, but far braver version of history is that he rose through the ranks of the Roman army and fiercely protested the Emperor’s persecution of Christians, which ultimately cost him his life. His heroism was inspirational and in 1348, well over a thousand years after his death, he became the patron saint of England, with his very own flag, the red cross of a martyr, on a white background and the inspiration behind the George Cross – the highest medal for bravery that a civilian can achieve. In fact, he is not just celebrated in England. His iconography and coat of arms can be found on flags in countries and cities around the world.

What he thought about our green and pleasant land is not recorded as he never actually visited this country, so along with tea, fish and chips and the penny farthing, St George is symbolically linked to England, but came from elsewhere.

His legacy is celebrated on 23rd April, which coincidentally is the day on which Shakespeare was born and died, just worth mentioning as it might come up as a Pub Quiz question at this time of year, and if it does, you’re welcome! In fact, the bard famously mentioned the saint in one of his plays, ‘Henry V.’

‘Follow the spirit; and upon this charge. Cry ‘God for Harry! England and Saint George!’

Unfortunately, the day isn’t recognised as a Bank Holiday in England, unlike St. Andrew’s Day in Scotland and St. Patrick’s Day in Northern Ireland. However, Food Sorcery Cookery School who love a good celebration, have decided to combine St George’s Day and World Malbec Day, with a veritable feast of traditional English food and delicious Malbec wine. Chef will prepare four courses and each one will be paired with a different Malbec.

So put on your glad rags, pin a red rose to your lapel, and join us!

How to lose weight, regain energy and eat the right foods to stay feeling fabulous