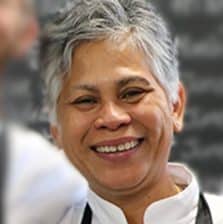 I was about seven years old when I started cooking. I lived with my Aunt who was a cook in one of the many Royal Thai households dotted around Bangkok. She did things the old fashioned way even in those days and I had to learn fast if I was to avoid a telling off or even worse. My early memories are filled with making sure I was in the right place at the right time in order to carry out my household duties on time and in the manner my Aunt insisted on.This meant that I had little time for play, or doing any of the things most kids my age did but, at the same time, I did not feel too badly done by. My day revolved around food. I would usually wake before anyone else to light the charcoal then make enough rice for breakfast. I graduated to making fish cakes, which I used to sell at the local railway station to commuters on their way to work. This meant getting up at the crack of dawn in order to make them fresh each day (no refrigerators in those days!). I was only very tiny and often had to wait for the trains to pull away from the station so I could jump down onto the track to recover the coins I had missed when people threw the money too quickly. My fish cakes must have been popular because I never came back home with any! So began a life based around cooking. As I grew older I learned how to cook more and more dishes until I had a fair repertoire of recipes on which to build a career. I will take you through the years of my childhood by showing you the very dishes I was taught as a girl by my Aunt to whom I owe so much.