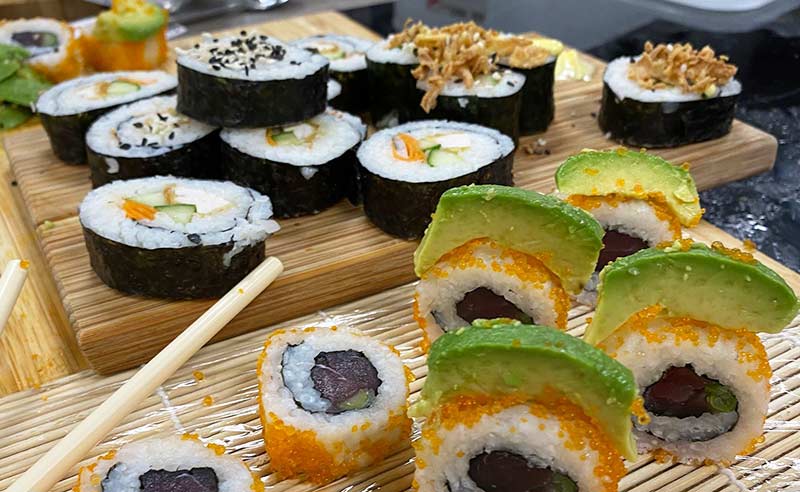 We hope you enjoyed your evening at the cookery school, Chef Jan loves to delight guests with his mouth-watering Gyoza & Sushi. If you have any questions please ask and we’ll get back to you.

For the dipping sauce

Place diced shallot, spring onion, soy sauce, vinegar, water, sugar, salt, mustard, and pepper in a bowl and whisk until sugar and salt are dissolved and mixture is combined. Whisk in oils until combined.

Temari is a less known variety of sushi overseas and is also not as common to find in Japan, although it’s a popular style of sushi to make at home given its simplicity in form. It’s made with a small round ball of pressed rice topped with a thin layer of fish or other ingredients, which is fitting since the name comes from the traditional Japanese embroidered ball, temari, meaning “hand ball.” Often colourful and decorative, it’s a popular food for parties and picnics, and is often made for the traditional girl’s day celebration known as Hinamatsuri. If making temari for a picnic, it’s best to used cured or cooked seafood rather than raw sashimi.

Maki, also known as “norimaki,” refers to a type of sushi where rice and ingredients are carefully rolled in a sheet of nori seaweed, which is then cut into smaller pieces. It’s believed that makizushi came into existence in the early 1700s, soon after sheet nori was invented with a similar technique used for paper making. The name norimaki is made up of two Japanese words: “Maki” meaning to roll and “nori” referring to the toasted sheet of nori seaweed used to wrap the ingredients. This is the most common type of sushi nowadays (seaweed on the outside) ….Similar to Maki: Uramaki is a famous inside out sushi, using similar techniques as for making (California roll)

Gunkan maki is another type of maki—“rolled” or “wrapped” sushi—and was invented in a Ginza sushi restaurant in the 1940s. It’s made by wrapping a wide strip of nori around a rice ball while leaving enough space at the top to be filled with various ingredients. The name, translated as “battleship” or “warship” sushi, comes from its shape, resembling a tiny ship. Popular toppings for gunkan maki include uni sea urchin, squid, salmon roe, negitoro (a blend of fatty tuna belly and green onion), potato salad, and kanimiso (blended crab brains). Gunkan maki is commonly found both in takeout sushi bento boxes and at sushi restaurants

Temaki is a novel type of sushi with a shape resembling that of an ice cream cone. To make it, rice and ingredients are held within a sheet of nori wrapped into a conical shape. It’s popular at restaurants, as well as for making at home, given its simplicity. Temaki lends itself to a variety of fillings, with some popular types including umeshiso—a paste made of fresh shiso leaf and umeboshi (pickled plum), negitoro, squid with and without natto, and sweetened omelette.

Oshizushi (pressed sushi), also known as hakozushi (boxed sushi), is a strikingly shaped style of sushi originating in Osaka. This variety is made by pressing ingredients into an “oshiwaku” rectangular box, then layering it with toppings and cutting the sushi into neat angular shapes like rectangles, triangle, or small squares. The toppings include fish like mackerel or gizzard shad and may also be decoratively layered with edible leaves like bamboo. Toppings may be placed in different arrangements, such as diagonally or with a whole fish from end to end, and this unique display makes oshizushi a popular choice for bento boxes and gifts.

Chirashizushi, translated as “scattered sushi,” is a bowl of rice topped with a variety of ingredients, with popular toppings including pieces of salmon, squid, cucumber, shredded omelette, and boiled prawns. It’s similar to a kaisendon (Japanese rice bowl topped with a large amount of seafood), with the main difference being that chirashizushi uses vinegared sushi rice whereas kaisendon uses plain steamed white rice. You can easily find chirashizushi throughout Japan as it’s widely available in convenience stores, supermarkets and department store food courts. It’s often included as a bento box feature, or enjoyed as a stand-alone meal, given its wide variety of ingredients. Its decorative, bejewelled appearance makes it popular to serve at celebratory occasions.

For a more intense tuna/sea kelp flavour: In a small saucepan bring the soy sauce, mirin, rice vinegar, katsuobushi, kombu and lemon zest (if using) to a boil. Turn off the heat and let it cool completely. Strain out the solids. Stir in the citrus juice and honey.

For a milder tuna/sea kelp flavour: Place all the ingredients in a glass jar, shake, cover and chill in the refrigerator for at least 24 hours or up to a few days, shaking occasionally. Strain out the solids.

*For a simplified or vegetarian version, you can omit the katsuobushi and kombu.

Store in in a sealed jar in the refrigerator. It will keep for up to a month.

How to cook sushi rice

Cooking Together – Dining out with a difference